Curtain on the Cannes Film Festival 2022, with the supreme award attributed to the film Without Filter (Triangle of Sadness). The 48-year-old Swedish director Ruben Östlund receives the ultimate award on the Croisette for the second time, after being crowned for The Square in 2017. A special prize was awarded to the Dardenne brothers and their film Tori and Lokita to celebrate this 75th edition. Focus on the entire prize list.

The Palme d’Or for “Without Filter” (“Triangle of Sadness”)

Ruben Östlund wins a second Palme d’Or for his film Without Filter (Triangle of Sadness). According to jury president Vincent Lindon, “the whole jury was extremely shocked by this film”.

The 75th Golden Palm #CannesFestival2022 is awarded to Ruben Östlund for “Triangle of sadness” pic.twitter.com/Us2sLaDBnI

Already awarded the Palme d’Or in 2017 for the film The Square, Ruben Ostlund signs with his last feature film a satire on the power of money king by staging two models and influencers cruising on a luxury boat. “I think when we started this film, we had only one goal: to make a film that interests the public and teaches them things at the same time. We all agreed that what is unique in the cinema is that we can have fun living an experience that we then show to the public”was moved the Swedish filmmaker. 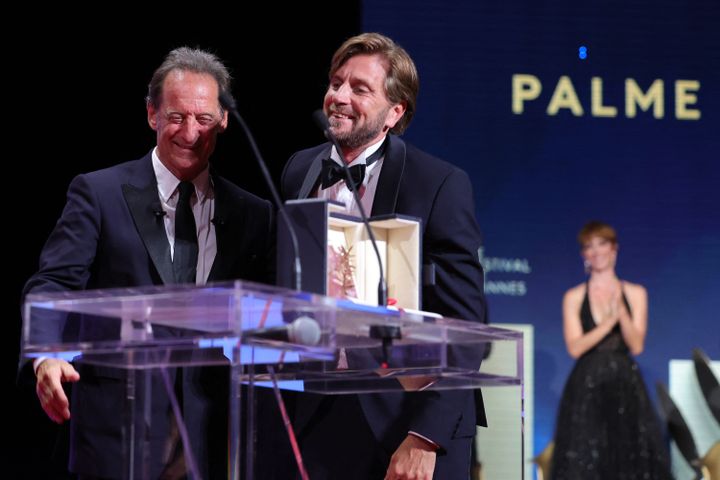 This is the second time that the Swedish director has received the prestigious Palme d’or. (VALERY HACHE / AFP)

>> Our review of the film “Without Filter”

The Grand Prix for “Close” and “Stars at Noon”, tied

Between Close and Stars at Noon, the jury decided not to decide. The film by Belgian director Lukas Dhont and that by Frenchwoman Claire Denis both receive the prestigious Grand Prix.

Badly received by critics, Stars at Noon nevertheless seduced the jury chaired by Vincent Lindon. This feature film features two lovers played by Margaret Qualley and Joe Alwyn, who form a relationship in a Nicaragua on the brink of civil war. “Margaret Qualley, I saw her for the first time in Cannes watching Quentin Tarantino’s film Once Upon A Time In Hollywood. I fell in love with it”explained Claire Denis in her speech.

>> Our review of the film “Stars at Noon”

The grand jury prize is awarded ex-aequo to “Close” by Luka Dhont and “Stars at noon” by Claire Denis pic.twitter.com/Vi0rl6Reui

Lukas Dhont, a 31-year-old director, followed him on stage to also receive the Grand Prix for Close. “I wanted to make a film about youth and show that being vulnerable is not a weakness. If we let others get close, vulnerability can turn into super courage”did he declare. Close tells the story of two teenagers whose friendship story turns tragic because of the gaze of others.

The Jury Prize for “Les Huit Montagnes” and “Hi-Han”, ex-aequo

Another tie, this time on the jury prize, awarded to the films The Eight Mountains and to Hi Han.

Belgian co-director Charlotte Vandermeersch explains that they have “wanted to make a film that talks about life in all its fragility and all its strength” with The Eight Mountains : “This film was necessary for us and it was very beautiful, I love you from the bottom of my heart”, she declares before kissing Felix Van Groeningen, her partner and co-director.

>> Our review of the film “The Eight Mountains”

For his part, the Polish director Jerzy Skolimowski, aged 84, wanted to “thank his donkeys”, stars of the feature film: “Much of the film was shot in Poland, but I was smart enough to choose an intelligent species of donkey, which lives in Sardinia. We only have two in Poland, I’ll give you their names: Stacko and Pola. Then we shot in Italy where there are a lot of Sardinian donkeys.”he declares before imitating the cry of the donkey.

The Directing Award for Park Chan-wook (“Decision to leave”)

Third trophy at Cannes for South Korean director Park Chan-wook, this time awarded the prize for directing for his film Decision to Leave, which tells the story of a seasoned detective, who investigates the suspicious death of a man on top of a mountain. He begins to suspect Sore, the companion of the deceased, while being unsettled by his attraction to her.

“With the pandemic, borders with countries have closedcommented Park Chan-wook receiving his award. We had trouble communicating. Sometimes it was quite complicated. We were very afraid of each other and the cinemas were deserted. But now, perhaps the public will gradually return to theaters. We were able to overcome this virus and I am convinced that with the filmmakers, we can overcome the fear of the spectators so that they can return to the theaters.

>> Our review of the film “Decision to Leave”

Special edition, special price! The jury of this 75th Cannes Film Festival has decided to create a prize for the occasion and to reward the brothers Jean-Pierre and Luc Dardenne (already double Palme d’or) for their film Tori and Lokita. “When we were preparing our film last January, we met a baker in Besançon who was fighting to avoid the expulsion of his apprentice from France, says Jean-Pierre Dardenne. Our film, we dedicate it to this baker who went on a hunger strike for 12 days to avoid the expulsion of his apprentice without papers so that he can obtain a regularization “.

>> Our review of the film “Tori and Lokita”

A standing ovation for Song Kan-ho, who plays one of the main roles in the South Korean film The Lucky Stars (broker). The actor from South Korea, known internationally since his role in the film Parasite (the 2019 Palme d’or), this time plays a man who seeks to offer a new family to a baby abandoned by his mother in a “baby box” : “I really thank our director. I also dedicate this prize with the other actors of this film. I am also very happy to share this award with my family who are up there in the room”, said the 55-year-old actor.

>> Our review of the film “Broker” 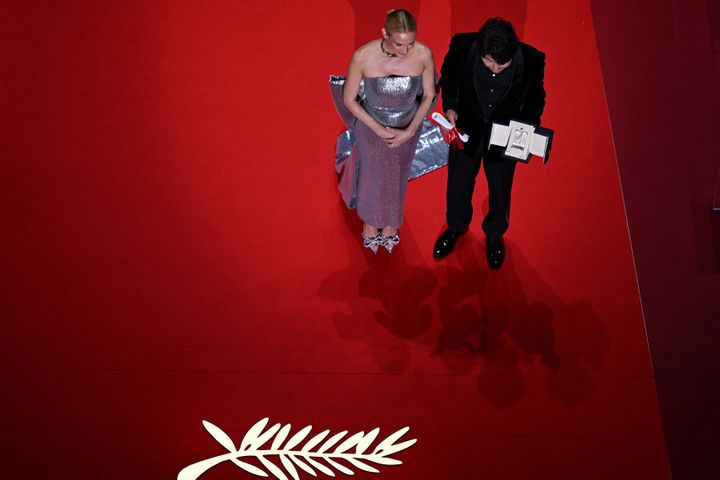 The 2022 Best Actress Award went to 41-year-old Iranian actress Zar Amir Ebrahimi. In Nights of Mashhad (holy spider), she plays a brave and stubborn journalist who investigates a serial killer of prostitutes in Iran.

>> Our review of the film “The Nights of Mashhad”

“I first want to speak in Farsi to my people at home. This film is about women, their bodies, hands, sex, feet. Everything that can be shown on the screen. Thank you Ali Abassi d ‘to have been so crazy and generous, thank you for this art so powerful’. She continued her speech in perfect French: “I am proud of my family, and thank you to France, this exotic and paradoxical country, full of happy people who love to be unhappy”.

The Screenplay Prize for Tarik Saleh for “Boy from Heaven”

Boy from Heaven by Tarik Saleh is awarded the 2022 Screenplay Prize. The 50-year-old director of Egyptian origin and Swedish nationality signed his prize “to young directors in Egypt, to show their work”. His film tells the story of Adam, a simple son of a fisherman, who integrates the prestigious Al-Azhar University in Cairo, epicenter of the power of Sunni Islam. He then finds himself, unwittingly, at the heart of an implacable power struggle between the religious and political elites of the country.

>> Our review of the film “Boy from Heaven”

The screenplay prize goes to Tarik Saleh (who takes pictures of the audience) for his film “Boy from heaven” pic.twitter.com/LKLTl14J2x

The Golden Camera for “War Pony”

The Camera d’or 2022 rewarding the first film is awarded to war pony by Riley Keough and Gina Gammell, a film selected in the “Un Certain Regard” category: “It’s one of the wonderful films this year. I am very happy that this wonderful film is highlighted. Thank you to the jury for recognizing our wonderful film. It’s a dream for us.” the director was moved.

The Palme d’or for short film for “The Water Murmurs”

The 2022 Palme d’or for short film is awarded to The Water Murmurs, by the Chinese Jianying Chen. “I am very happy to see that my courage is highlighted. I hope that films can change things, especially in China”

The Special Mention for a first film was awarded to Map 75 by 45-year-old Japanese director Chie Hayakawa. “Any director begins by making a first film. I am very happy that this film, which means so much to me, was selected at Cannes. Someone told me that it was a necessary film for us who live in this time and I thank him, I was enormously touched.”

And also: the moving and funny speech of Vincent Lindon

Vincent Lindon, president of the jury for this 75th Cannes Film Festival, was particularly moved but also proud to have been able to fulfill his “10 day warrant” with passion : “During these too short days, I loved everything, the people, the films and the electricity that reigns in the streets. Each of the films in this remarkable selection gave rise to passionate, but above all useful exchanges. All our decisions were taken with great unanimity”.

Then he used humor to show his deep attachment to the function: “A single term, only ten days, do you think that’s normal? Everything has to change so that nothing changes, as Alain Delon said. It’s time to put an end to this tradition that the Cannes jury changes every year. Let’s innovate! We need four more years! Unanimously we demand re-election.” Before concluding with a big smile: “Thank you for accepting me with so much love, kindness, benevolence, and all that’s left for me to say is see you next year!”